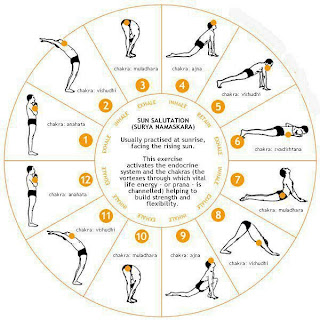 That most familiar of asana sequences, Surya Namaskar (Sun Salutation) is as rich in symbolic and mythic overtones as it is in physical benefits.

Surya has a lot of significance in the Hindu religion, while the term literally translates to “the Supreme Light”. It is the chief of solar deity since the term generally refers to the Sun. The mythical image representation of Surya has... golden arms and hair. He is known to ride his triumphal chariot that is attached to seven horses that takes him through to the heavens. Those seven horses represent the seven chakras found all throughout the body.

One of the means of honoring the sun is through the dynamic asana sequence Surya Namaskar (better known as Sun Salutation). The Sanskrit word namaskar stems from namas, which means "to bow to" or "to adore." (The familiar phrase we use to close our yoga classes, namaste—te means "you"—also comes from this root.) Each Sun Salutation begins and ends with the joined-hands mudra (gesture) touched to the heart. This placement is no accident; only the heart can know the truth.

The Benefits of Sun Salutation


• Tones the digestive system
• Ventilates the lungs and oxygenates the blood
• Gets rid of large quantities of carbon dioxide and other toxic cases
• Strengthens the abdominal muscles
• Tones the nervous system and improves memory
• Improves muscles flexibility
• Helps reduce fat
at 08:30